Good morning. I am Olivier Wagner. I have been operating 1040 Abroad since 2012. I’m an annual agent and a CPA.

Today, I will discuss tax residency in Canada. While this is not a U.S. tax concept, it does impact a lot of my clients. We will get an overview of the residency rules as set out both in Canadian domestic law and the tax treaty.

The tax treaty portion might be interesting to people who are not in Canada in that most tax treaties follow the OECD template.

In particular interest to U.S. citizens is that the first step to being able to use the tax treaty is that you will be a tax resident of both countries and U.S. citizens are luckily tax residents in the U.S. and they will therefore be able to apply the tie-breaker rules. 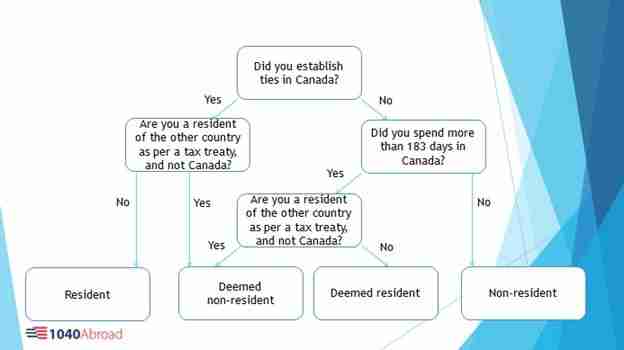 Someone who doesn’t have ties with Canada spends fewer than 183 days would be a non-resident and therefore only taxed on Canadian sourced income.

At the other end of the spectrum, a regular resident is someone who has ties to Canada and can’t use a tax treaty, they would be taxed on their worldwide income would have to sever their ties to Canada in order to stop being a resident.

First, we would look at ties. If you have significant residential ties with Canada, you would be a resident (although it can be overridden by the tax treaty)

First primary ties would be:
– Having a dwelling in Canada. A dwelling is a place at which you stay at least two months
– Living in Canada with one’s spouse or children
– Having permanent resident status AND have provincial health coverage

Secondary ties would not by themselves make someone a tax resident, but they might when taken in aggregate. Those include bank accounts, investments in Canada, a Canadian employer, place of business, or association memberships.

If one is a resident, either a factual resident or a deemed resident (spent over 183 days in Canada), they can use article 4 of the tax treaty.
First, you would need to be a tax resident of both countries, this part is easy for U.S. citizens who are automatically U.S. taxpayers.

Then you would look at the so-called type Tie Breaker rule. You will be a tax resident of one country and not the other (a U.S. citizen wouldn’t be able to use it to be a U.S. non-resident but they might avoid being a Canadian resident).

In most cases, the center of vital interest would be the last step you would look at to determine which country would have you as a resident using the tiebreaker rules.

Again, a U.S. citizen cannot use the tie-breaker rule to stop being a U.S. taxpayer.

That’s all for today. Feel free to contact me if you have any questions. I look forward to answering any of your questions

How could the IRS find out that I am not tax compliant as an expat?
PFIC and form 8621
US expat taxes: A guide for filing taxes as an American living abroad