Tax obligations under a PFIC regime and Form 8621

The first section is the identification of the taxpayer – John Doe

The Employer Identification Number is most likely “Not Applicable” (unless the PFIC has an EIN).

Part I describes the shares

Part III would be left blank.  It would only apply if you had made a Qualified Electing Fund election.  Under the scenario we’re using here, we did not.

Part IV would be left blank.  It would only apply if you had made a Mark-to-Market election.  Again, under the scenario we’re using here, we did not. Dude, it’s not November, why do you keep on talking about elections 😉 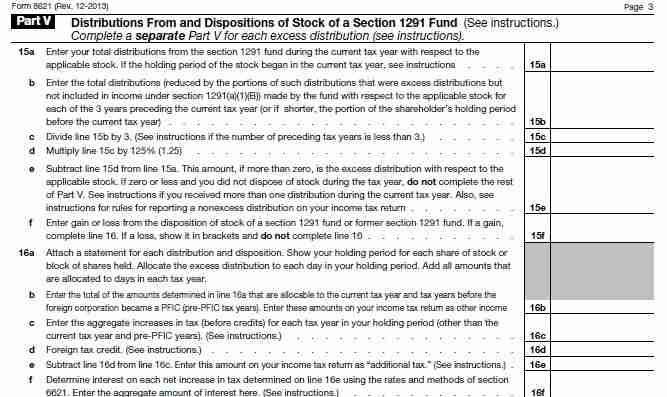 Part V is where the computation of your tax takes place, let the fun begin!

Question 15a: That would be $100 (in our case, the distribution is the proceeds from the sale (in excess of basis), but that’s also where you would enter any dividend or interest you may receive from the PFIC)

Question 15b: That would be $0 (no dividend or interest was paid in prior years, they ask that to get the 125%, in this case all excess distribution (what normal people would call capital gains in this case) will be taxable since 125% of zero = zero)

Question 15c: That would be $0 (Told you it would be fun, so here you go, zero divided by three equals zero)

Question 15f: That would be $100 (Gain on the sale of the stock, an excess distribution under the PFIC regime)

Question 16a: See statement to attach to return Statement for 8621 – sec 1291 (the numbers in the following lines come from the Excel file – please refer to that file to see how they’re computed)

Question 16d: For this example, I’ll assume that we don’t have any foreign tax credit to use, which is a shame because I like FTC.

Part VI would be left blank. We did not (previously) make an election to extend the time to pay tax.

Now, the $4.97 is going to line 21 (“other income”) of 1040, which can then be offset by lot of stuff like the adjustment to AGI (educator’s expense, then the standard/itemized deductions, personal exemptions, FTC from other passive income…). Whereas the $32.61 +$1.23 = $33.84 would be reported as an additional tax and can not be offset by anything (other than FTC for tax paid for that specific PFIC transaction, which would have been line 16d).

Also, remember that as the song goes “Once a PFIC, always a PFIC”. Not a song? Well, it was a song in my head.

So, if you invest in a biotech company at early stages for instance, well it will do research (R&D expenses), but all its income will come from interest/dividends from the cash/investments it set aside. Likewise, its balance sheet will be investments it has to fund the research = it’s a PFIC, and always will be (for you and for the shares you bought at early stages, other persons and shares bought after the patent was discovered, drugs were sold… would be treated differently, provided the corporation no longer meets the PFIC asset, not income tests)